Housing markets and wage growth – were we better off 20 years ago?

It’s a great topic of conversation at many a backyard barbecue. At some point over the past year, you’ve probably found yourself chatting to your mates about the good old days. And for those who are trying to get a foothold in the midst of Australia’s current housing climate, the dialogue has probably been centred around housing affordability.

When it comes to the basic cost of living, many feel a dollar just really doesn’t go as far as it used to. As it so happens, this isn’t just economic paranoia – we are living in a period of time where the cost of living for essentials has actually skyrocketed.

So what are the differences?

By and large, Melbourne would’ve been the best investment for your money. If you had access to a smaller amount of capital at the time, you could have invested in Hobart and Adelaide and seen similar kinds of returns to Sydne.

We’ve also done some comparisons on those everyday costs. 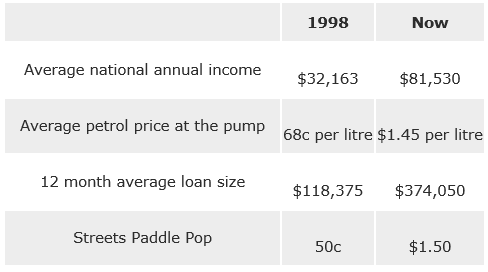